A couple of weeks ago, on the last day of our vacation in Canada, Sue and I walked into a used-book shop in Halifax, Nova Scotia. The “kid-in-a-candy-store” analogy is much too weak a description of my elation at being surrounded by thousands of wonderful friends just waiting to be read. I got lucky in this messy, yet organized, Valhalla. 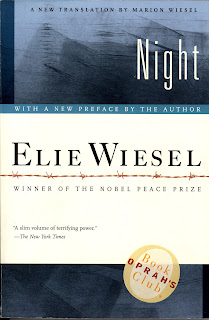 In my continuing attempt to reconnect with, and to understand, my past, I have spent recent years reading hundreds of books about the Second World War — particularly those dealing with the Holocaust. As if guided by an invisible hand in that Halifax store, I walked directly to a shelf at the end of which stood a tiny, soft-cover, 120-page, gem with a simple title — NIGHT.

Written by the recipient of the Nobel Peace Prize, Elie Wiesel, NIGHT is a powerful account of his experiences in German concentration camps. I have read several of Mr. Wiesel’s other books, but this one touched me more than the rest. Particularly powerful and poignant is the author’s relationship to his father — how he (16 years old at war’s end) and his dad protected and cared for one another under circumstances so unbearable that they strain one’s imagination. Wiesel’s account of the cruelty of the Nazis is almost inconceivable, while the bravery and tenacity of the victims are beyond admirable.

While NIGHT is an almost unbearable read, it is a necessary one. I am grateful to Elie Wiesel and his fellow survivors for having borne witness to the horrors of  the Holocaust and for sharing their memories with us.